Well, a half!
After my injury last year 6 days before I signed up to the Silverstone Half Marathon I didn’t exercise for about 4 months and didn’t run again until October time. So I decided to take things slower, read up more about what I should be putting in and how I should be training my body.

I then get a text from an old friend who is training for the marathon but has injured himself, saying if I can get the names switched for his place on the Silverstone Half – I could have it! After getting myself excited at the thought of being able to compete, he then tells me this isn’t possible 😦

So I had a last minute look on the Silverstone Half Marathon website this week and they had only charity places left; I picked one and I’m now entered! I have 4 weeks (and two days) until the event and I’m doing it for a worthy cause, The Air Ambulance for Children.

That’s one more to (hopefully – keeping everything crossed) cross off of my list! If I get injured, I am officially giving up with running! EEEEK! Wish me luck all.

So while watching ‘Gossip Girl’, alone, on a Friday night, I’ve decided to give a small update!

Although I haven’t accomplished any of my Bucket List to date, I have made a start on them. I’m back running, I’m running 9 miles at the moment, only 4 away from my half marathon distance- but I don’t want to push it like I did last time, so I’ve got to train slower. I’m going to book my half at the end of this month, i’ll update once I’ve done it! I DID book into a 10k in the summer, it’s not even half of a half marathon but I am not one for summer running – bright red face, sweaty betty and in barely any clothes…not cool! So I need to make sure I’m staying running for my Autumn half.

So that’s one on the way.

Number two – Ben and I have booked Ireland for June, a cute cottage WITH a fire. It defeats the point going in June, but their weather is so unpredictable I wouldn’t count on no rain then anyway so we may get to use the fire!

And number three – the ‘proper’ German Christmas Market. Cologne is booked for December! So Christmassy and so me, I’m so excited! I can use my languages, indulge in German food and drinks and get into my Christmas spirit! EEEEEK!

So I may only have started 3, I am on the war path for 2 more now. Amsterdam was cancelled this week but my oldest friend is more than interested to come, perhaps this will be number 4! I’m going to have a real good hunt through the list now for number 5……

Although I do have one of the biggest Bucket Lists I’ve yet to see on the internet, I can’t sit and say I haven’t achieved anything! Especially as I’ve spent hours mindlessly browsing blogs and others ‘to do’ lists, I can tick some off!

As it’s the New Year and one of my resolutions is to complete a few this year, I thought I’d give myself some inspiration by looking back at things I have done in my life already.

1) Visit Cadbury World (Nov 2012) – I have just hunted everywhere for pictures from here but it was towards the end of 2012 – apparently I did a lot in 2013 that I cannot be bothered to look that far back! 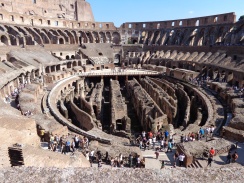 appropriate! Was a wicked  experience though, regardless. 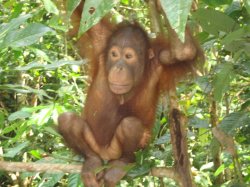 I did 5 and 6 in the same few days when I went to Chiang Mai travelling, it was an amazing experience. 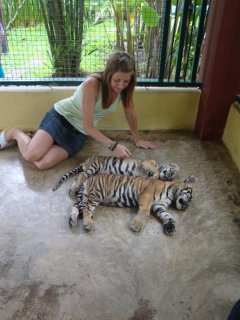 Here is one of the naughty Orang-utan’s I met!

9) Cuddle a Tiger (June 2011) – I know, I know this is really bad as they tiger’s are definitely not ‘fully awake’ shall we say but I really wanted to go. Plus we got to see the little baby one’s who were 100% fully awake 🙂

11) Have a tourist day in London ( Aug 2013) – I did this with Ben a few months ago, before I quit my job in the city. It was so much fun, you forget what is on your door step sometimes.

12) Go wine tasting (June 2013) – it was my 22nd birthday treat from Ben, it was SUCH a good day. We ended up watching some cycling event in the city and getting absolutely battered!

13) Go Tubing in Laos (July 2011) – I went in 2011 just after around 20 of the buildings got ruined in the really bad floods, the worst for decades. There were 3 bars remaining which made it a bit better for us I think, they were so busy! 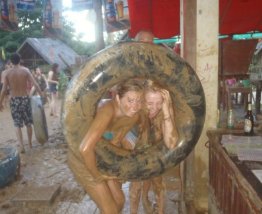 Here are two of my tattoos that I have pictures of, the other is pretty hidden so it doesn’t often come say ‘hello’ for photos:

So all in all I don’t think I’ve done too bad really. I’ve been lucky enough to ski nearly every year since I was a little tot and attempted snowboarding, I’ve visited quite a lot of Europe – especially Germany (my favourite) and I’ve experienced much more than many people have at 22.

I am going to now go and re-read my first post to get some inspirations for my first Bucket List adventure of 2014!